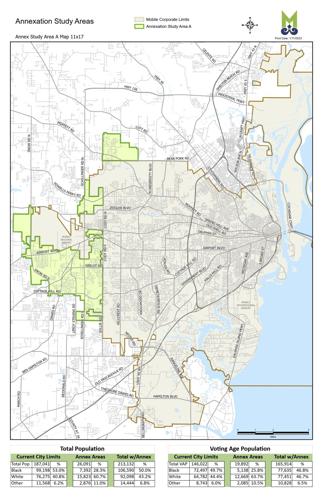 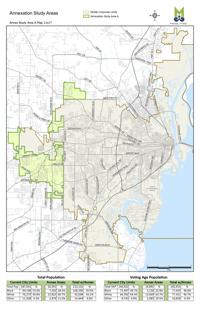 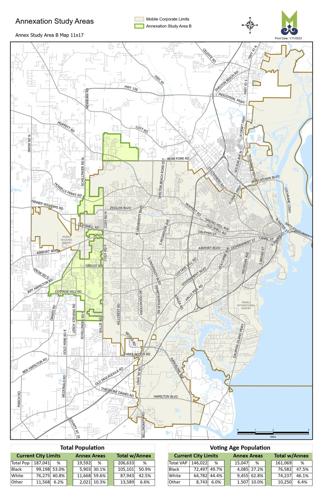 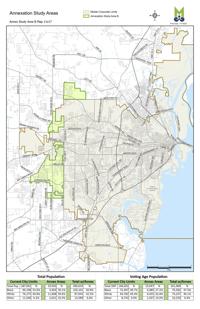 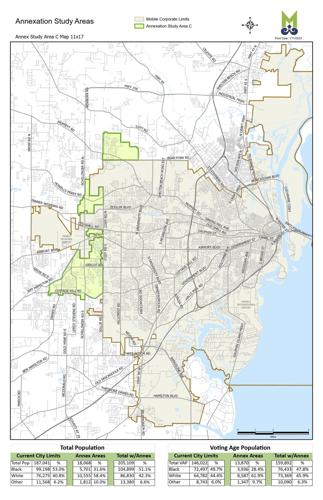 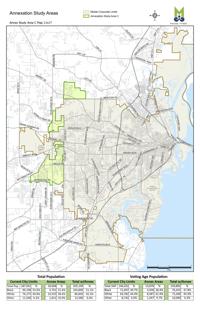 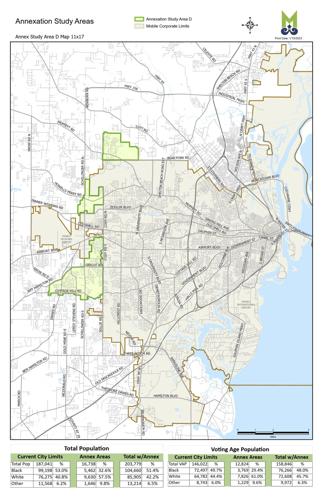 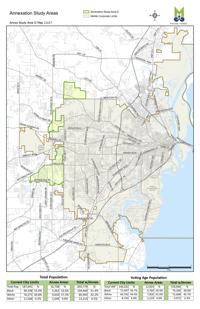 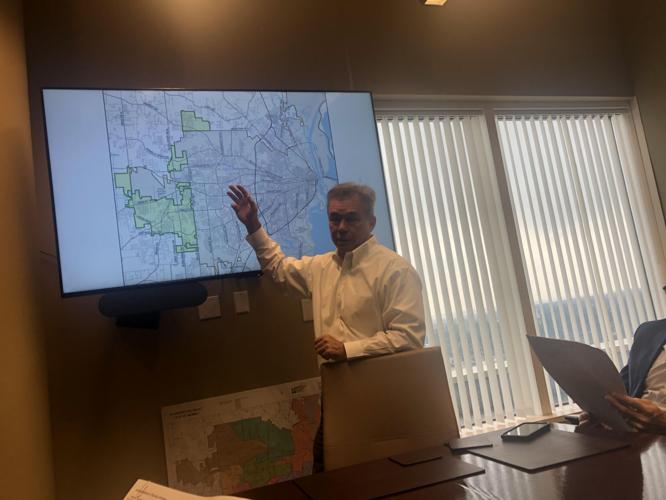 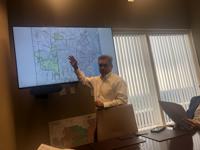 With annexation, the city of Mobile would grow its revenue, become the second largest city in the state and proactively prevent the loss of approximately $20 million to its budget from areas of the police jurisdiction that could become their own cities, officials with Mayor Sandy Stimpson’s office confirmed Wednesday morning during a presentation to media on four study group maps.

While the maps of various annexation scenarios each show a growth in the city’s population above 200,000 they also indicate a slight decrease in the municipality’s Black population. The four maps — made public for the first time Wednesday — will be sent to PFM Financial Services for a six-week study before being placed on the Mobile City Council’s agenda.

The biggest gain in population comes from the potential 26,000 people added in what the administration referred to as “Map A.” The first map includes annexation of a large area west of Cody Road to just west of Snow Road. It also includes King’s Branch, a neighborhood consisting of a predominantly Black population, which was included in the 2019 annexation attempt.

`”We didn’t want to dilute the Black population because we felt it would be dead on arrival,” Stimpson Chief of Staff James Barber said of the annexation process. “We also could not upset the Black voting-age majority in District 7. This map achieves that, with a 50 percent Black population and voting-age population parity.”

Part of the reason the city was able to make annexation maps this time that keep demographics better intact is because growth in West Mobile includes both Black and White residents, Director of Communications Candace Cooksey told media members.

In total, the city has lost about 8,000 residents since the last successful large-scale annexation in 2013, Cooksey said. At issue, she said, is the lack of “desirable” and “affordable” housing within the current city limits. As an example, Cooksey quoted District 1 Councilman Cory Penn who has said families looking for a three bedroom house with an attached garage in his district are going to have a hard time, and if they find one it’s not affordable.

“We are dedicating more money to affordable housing than ever before,” she said.

This includes new projects, like the 96-unit affordable housing complex called Maryvale Place, which has broken ground at the site of the old Mae Eanes School. The city is also in the process of acquiring three other sites where affordable housing can be developed, Cooksey said.

In addition, the city will continue to develop infill housing in the downtown and midtown areas, she said. The city will incentivize developers to build single-family homes on vacant lots.

The second annexation study area is a bit smaller, only adding 19,592 residents to the city limits and bringing the total population to 206,109.

The biggest change in “Map B” from “Map A” is a reduction in the size of the area west of Cody Road. In “Map B” the area under annexation consideration stops at Jeff Hamilton Road, instead of continuing west to Snow Road, as it does in “Map A.”

The study area labeled as “Map C” is smaller than “Map A”and “Map B,” adding a total population of 18,068 and bringing the city’s total population up to 205,109. The biggest difference between maps A and B and “Map C” appears to be the removal of an area west of Sollie Road to Leroy Stevens Road that was part of the maps previously highlighted.

As in the other two study areas, “Map C” also slightly shrinks the city’s percentage of Black population.

The area marked as “Map D” is the smallest of the groups to be studied. It adds 16,738 residents and results in a city population total of 203,779. The fourth and final study area cuts the large area west of Cody Road down a bit more than in “Map C” and also doesn’t include the portion near Sollie Road.

Barber touted both immediate and long-term revenue benefits as a result of annexation. He also spoke about financial pressures that could be put on the city without the growth, especially if one or all of the areas that make up a part of the city’s police jurisdiction decide to incorporate.

Currently, the city collects half of its normal sales tax rate, or 2.5 percent on the dollar, from retail sales in the three-mile area extending past the city limits, Barber said. The city also is allowed to collect business license fees in the police jurisdiction.

Together, that translates to about $20 million per year in revenue from the police jurisdiction. If these areas get fed up waiting for Mobile to annex them and decide to incorporate, or join another city, like Semmes, he said, the city loses out on that revenue.

However, annexation of those areas could bring in as much as $12 million in revenue over expenses, after the five-year moratorium on ad valorem taxes passes. The ad valorem tax in the newly annexed area would increase by 7 mils, or about $70 per year per $100,000 of value.

However, even before the city’s portion of the property tax is assessed, Barber said the city would see an increase in revenue over expenses.

“Even if the move was revenue neutral, I believe it’s the right thing to do,” he said.

The biggest expense in the newly annexed areas would be public safety costs, Barber said, and the city already provides police and fire service. As many as 40 Mobile Police officers patrol the jurisdiction currently and the Mobile Fire-Rescue Department responds to fire calls there.

Residents who are annexed would benefit from city EMS service and they would also benefit from city trash and garbage pickup. Currently, those residents pay a fee for garbage and have to take their own yard debris and construction waste to the landfill. Under the city, those residents would not pay a fee for garbage or trash because no resident of Mobile is required to do so.

PFM will validate the financial information the city has on the annexation numbers, Barber said.

As for costs associated with continuing service in the police jurisdiction, Barber said a chunk of the $21 million spent out there includes a contract for beds at Mobile Metro Jail, which totals $10 million, and payments for the city’s municipal court. Those payments would be made even if the city decided to do away with the jurisdiction.

A decision to pull back on the jurisdiction would also be a complicated one, Barber said, as volunteer fire departments are mostly unwilling to service non-rural areas. Also, when it comes to fire district fees, all rooftops are typically charged the same, he said. This means that a large store and a residential home would pay the same amount for fire service out there.

PFM received the study area maps on Tuesday, Jan. 17, and have told city officials the study could take up to six weeks. At that point, a resolution to set up an annexation referendum could be added to the City Council agenda and voted on.

If approved by five of the seven councilors, Mobile County Probate Judge Don Davis has to call for a referendum within about two weeks. Voters in the areas under consideration would then be allowed to vote “yes” or “no” on annexation. The areas that vote “yes” will be added to the city limits and the areas that vote “no” will not be added.

Barber said the annexation referendum could take place as early as this spring, depending upon what the council does.

Dale Liesch is assistant managing editor and a reporter with Lagniappe. He can be reached at dale@lagniappemobile.com

Dale Liesch has been helping to keep Mobile Bay funky since 2014. He covers the city of Mobile and brings dad jokes into the office almost every day. He studied journalism at the University of Alabama and graduated way back in 2007.  Dale Has won a n

Article is great, but it would be nice if the map inserts were bigger so we could see them better.

Welcome to the discussion.

Keep it Clean. Please avoid obscene, vulgar, lewd, racist or sexually-oriented language.
PLEASE TURN OFF YOUR CAPS LOCK.
Don't Threaten. Threats of harming another person will not be tolerated.
Be Truthful. Don't knowingly lie about anyone or anything.
Be Nice. No racism, sexism or any sort of -ism that is degrading to another person.
Be Proactive. Use the 'Report' link on each comment to let us know of abusive posts.
Share with Us. We'd love to hear eyewitness accounts, the history behind an article.

Who is the most noteworthy Senior Bowl participant ever in the history of the game?

Check your email for details.

Submitting this form below will send a message to your email with a link to change your password.

An email message containing instructions on how to reset your password has been sent to the e-mail address listed on your account.

Your purchase was successful, and you are now logged in.

A receipt was sent to your email.

This offer is currently unavailable.